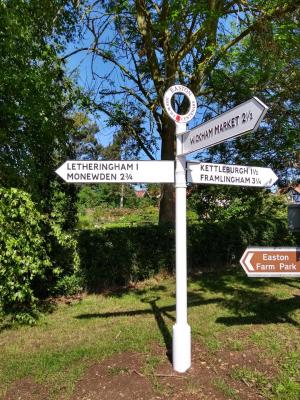 Easton Parish Council made a decision to replace the signposts in the village with heritage signposts to commemorate the WW1 Centenary. Suffolk County Council Highways no longer maintains signposts throughout the county and the existing ones were in a state of dis-repair or damaged with no prospect of being replaced. The Parish Council had to work with Suffolk County Council to ensure the specifications met the criteria that SCC gave, SCC also took jurisdiction for licencing and installing the posts. The Parish Council were met with unexpected delays for the installation, with the expectation that the signposts would be in place for 11.11.18 WW1 Centenery, the signposts were installed in May 2019.

The signposts support Easton's heritage identity and compliment the Conservation status of the village, they have received very many compliments from within the parish and from other parishes too. 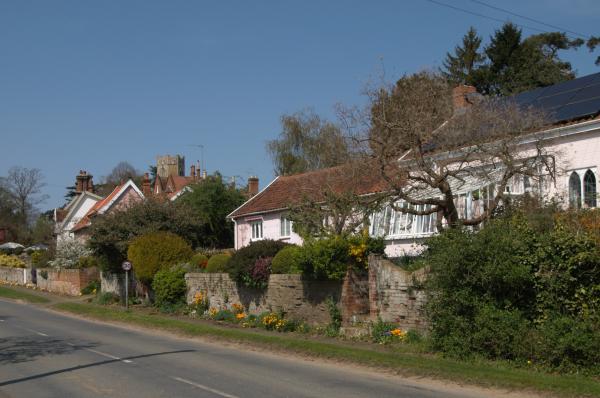 Easton Parish Council has negotiated with Suffolk County Council to be part of the rolling rota to have temporary speed activated signs - VAS sited in the village. The positioning of the signs is decided and controlled by Suffolk County Council, the rolling rota places the signs for two weeks, the sites are each end of the village, and they return three to four weeks later for two weeks on an ongoing rota. This has not incurred costs to the Parish Council and has avoided expenditure on the equipment and management of the signs. Further information can be found on http://www.suffolkroadsafe.net/suffolk-info/speeding-in-suffolk/

Suffolk County Council is responsible for public highways. To find the list of what can be reported and the reporting facility provided -  Click here to go to the SCC highways section of the SCC website. 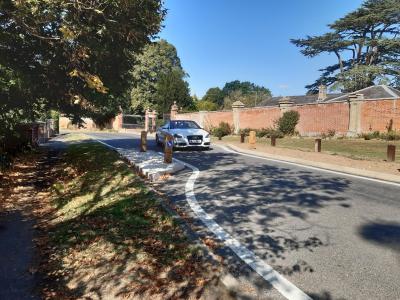 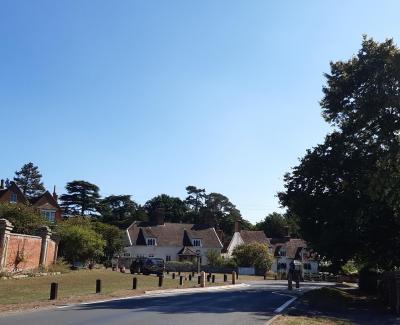 In 2017, options on how to best to spend the NCIL money were explored by the Parish Council. In 2018 a Household survey was conducted in the village with a high response rate of 67 percent. Almost 100 percent expressed the view that they were not happy with the speeding experienced through the village and wished for speed calming. The NCIL money has restrictions on how the money can be spent, also, if after 5 years from receipt it is not spent the Planning Authority (East Suffolk Council) takes the money back. Highways expenditure fitted within the restricted areas for spending NCIL.

The Parish Council decided to approach Highways to explore speed calming for the village. SCC Highways has to sanction and design any scheme that would be proposed and as such needed to conduct surveys, draw up plans, safety audits and legal requirements.

The results of SCC Highways speed surveys conducted in November 2019 showed that 85 percent of vehicles travelled at speeds above the speed limit, it was then confirmed that SCC Highways would sanction a scheme but would not be able to fund it.  Highways produced a speed calming scheme plan and the costs expected. Easton Parish Council were able to confirm that the NCIL money would cover the costs

A mail drop letter with the plan was sent to every household and uploaded onto the Parish Council website, so that people had an opportunity to give their views. The majority of residents showed full support for the proposed scheme.

The SCC Highways project to deliver the scheme then took place. It was important that the scheme was sensitive to the Easton Conservation Area and Easton Parish Council needed SCC Highways to follow the guidelines within the 'Suffolk Countryside Manual – Design Guidelines for Highways Works in Rural Areas.' The road pull outs are grassed and cobbled with oak posts, the new village name plates are of bespoke heritage design and form part of the gateway entrances to the village. 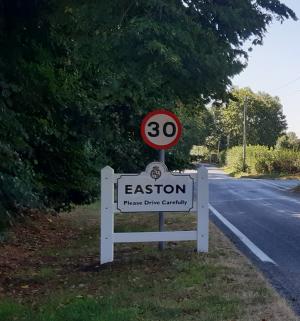 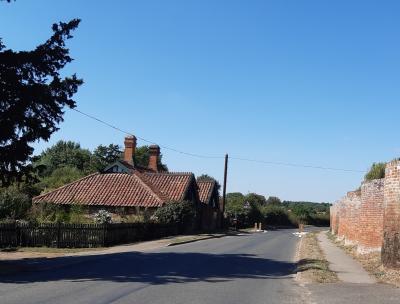